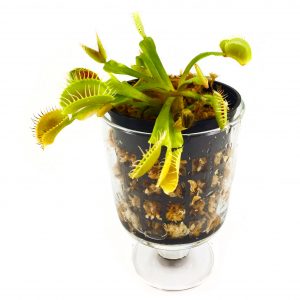 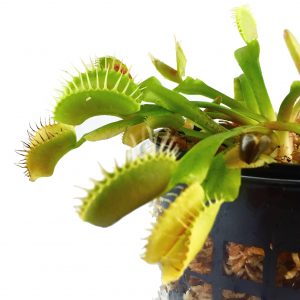 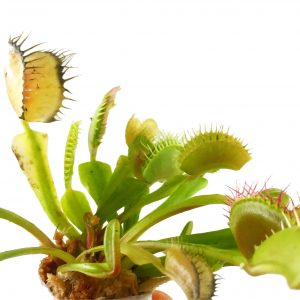 VENUS FLYTRAP
Each Venus Flytrap comes with a minimum of 3 plants and a maximum of 4 plants per container. The plants can be separated. To purchase one of our Venus Flytrap click HERE.

About Source
The Venus flytrap (also referred to as Venus’s flytrap or Venus’ flytrap), Dionaea muscipula, is a carnivorous plant native to subtropical wetlands on the East Coast of the United States in North Carolina and South Carolina. It catches its prey—chiefly insects and arachnids—with a trapping structure formed by the terminal portion of each of the plant’s leaves, which is triggered by tiny hairs on their inner surfaces. When an insect or spider crawling along the leaves contacts a hair, the trap prepares to close, snapping shut only if another contact occurs within approximately twenty seconds of the first strike. The requirement of redundant triggering in this mechanism serves as a safeguard against wasting energy by trapping objects with no nutritional value, and the plant will only begin digestion after five more stimuli to ensure it has caught a live bug worthy of consumption.

Carnivory
Most carnivorous plants selectively feed on specific prey. This selection is due to the available prey and the type of trap used by the organism. With the Venus flytrap, prey is limited to beetles, spiders and other crawling arthropods. In fact, the Dionaea diet is 33% ants, 30% spiders, 10% beetles, and 10% grasshoppers, with fewer than 5% flying insects. Given that Dionaea evolved from an ancestral form of Drosera (carnivorous plants that use a sticky trap instead of a snap trap) the reason for this evolutionary branching becomes clear. Drosera consume smaller, aerial insects, whereas Dionaea consume larger terrestrial bugs. Dionaea are able to extract more nutrients from these larger bugs. This gives Dionaea an evolutionary advantage over their ancestral sticky trap form.

Mechanism of trapping
The Venus flytrap is one of a very small group of plants capable of rapid movement, such as Mimosa pudica, the Telegraph plant, sundews and bladderworts.

The mechanism by which the trap snaps shut involves a complex interaction between elasticity, turgor and growth. The trap only shuts when there have been two stimulations of the trigger hairs; this is to avoid inadvertent triggering of the mechanism by dust and other wind-borne debris. In the open, untripped state, the lobes are convex (bent outwards), but in the closed state, the lobes are concave (forming a cavity). It is the rapid flipping of this bistable state that closes the trap,[10] but the mechanism by which this occurs is still poorly understood. When the trigger hairs are stimulated, an action potential (mostly involving calcium ions—see calcium in biology) is generated, which propagates across the lobes and stimulates cells in the lobes and in the midrib between them. It is hypothesized that there is a threshold of ion buildup for the Venus flytrap to react to stimulation. After closing, the flytrap counts additional stimulations of the trigger hairs, to five total, to start the production of digesting enzymes. The acid growth theory states that individual cells in the outer layers of the lobes and midrib rapidly move 1H+ (hydrogen ions) into their cell walls, lowering the pH and loosening the extracellular components, which allows them to swell rapidly by osmosis, thus elongating and changing the shape of the trap lobe. Alternatively, cells in the inner layers of the lobes and midrib may rapidly secrete other ions, allowing water to follow by osmosis, and the cells to collapse. Both of these mechanisms may play a role and have some experimental evidence to support them.

Digestion
If the prey is unable to escape, it will continue to stimulate the inner surface of the lobes, and this causes a further growth response that forces the edges of the lobes together, eventually sealing the trap hermetically and forming a “stomach” in which digestion occurs. Release of the digestive enzymes is controlled by the hormone jasmonic acid, the same hormone that triggers the release of toxins as an anti-herbivore defense mechanism in non-carnivorous plants. (See Evolution below) Once the digestive glands in the leaf lobes have been activated, digestion is catalysed by hydrolase enzymes secreted by the glands.

Oxidative protein modification is likely to be a pre-digestive mechanism used by Dionaea muscipula. Aqueous leaf extracts have been found to contain quinones such as the naphthoquinone plumbagin that couples to different NADH-dependent diaphorases to produce superoxide and hydrogen peroxide upon autoxidation. Such oxidative modification could rupture animal cell membranes. Plumbagin is known to induce apoptosis, associated with the regulation of the Bcl-2 family of proteins. When the Dionaea extracts were pre-incubated with diaphorases and NADH in the presence of serum albumin (SA), subsequent tryptic digestion of SA was facilitated. Since the secretory glands of Droseraceae contain proteases and possibly other degradative enzymes, it may be that the presence of oxygen-activating redox cofactors function as extracellular pre-digestive oxidants to render membrane-bound proteins of the prey (insects) more susceptible to proteolytic attacks.

Digestion takes about ten days, after which the prey is reduced to a husk of chitin. The trap then reopens, and is ready for reuse.

Menu
This website uses cookies to improve your experience. If you continue to use this site, you agree with it.
Ok